Meitetsu is a private railway company which operates an extensive railway network in both Aichi and Gifu Prefectures. The company’s official name is Nagoya Railroad, but the name “Meitetsu” is more commonly used. Meitetsu Railways can be used to travel to a variety of popular tourist locations in this region, and they also operate an important high speed rail link with Chubu Centrair International Airport. 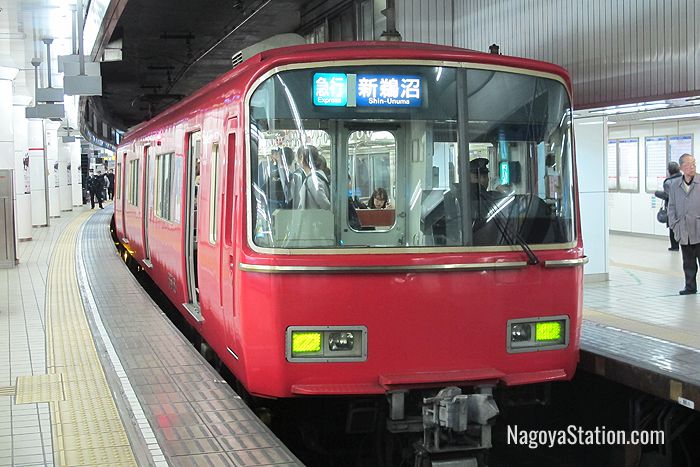 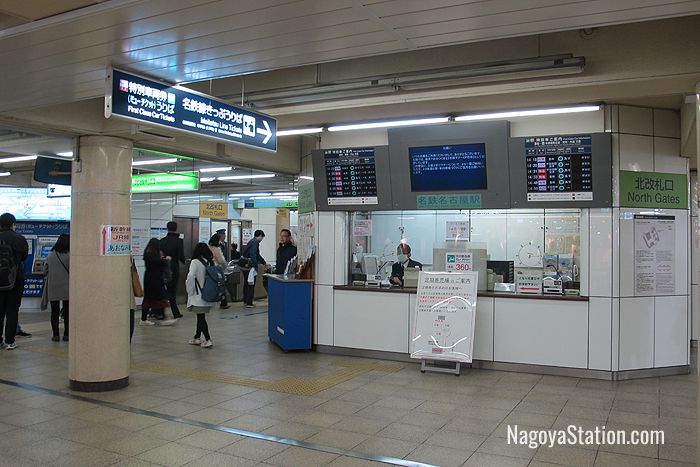 Tickets can be bought from ticket vending machines or from a ticket counter. Ticket machines have English guidance and are easy to use. First find your fare from the route map above the ticket machines. Then put the appropriate amount of money in the machine and press the corresponding fare button. You can then collect your ticket and any change and pass through the gates. Prepaid IC cards such as MANACA, SUICA, or ICOCA can also be used instead of a ticket to pass through the gates. Simply touch your card to the card reader at the gate and walk through. 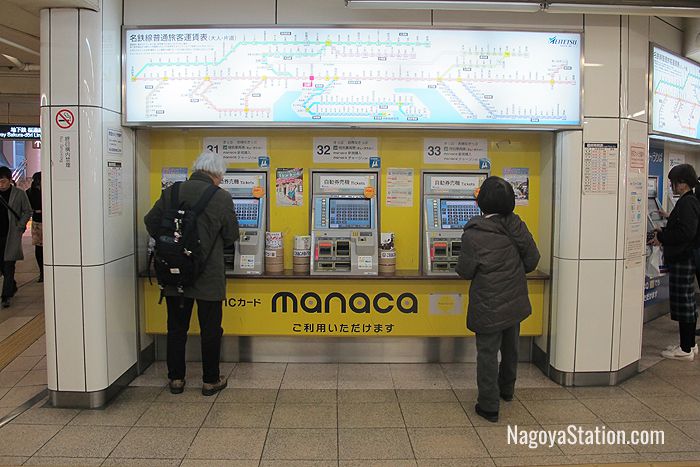 There are route maps over the ticket machines 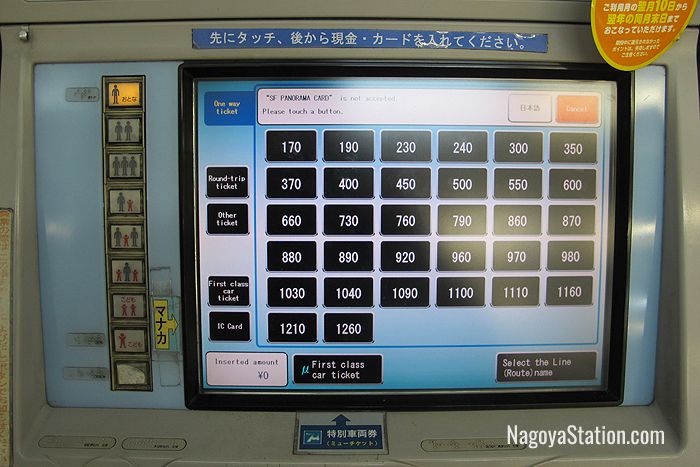 Limited Express trains have some first class carriages for which you need to pay an extra reservation fee of 360 yen. In the case of the μ Sky Limited Express, which runs between Chubu Airport and several major stations on the Meitetsu network, all seats are first class, so this reservation fee is automatically included in the cost. If you board a first class carriage without a first class ticket and there are seats free, then you can pay the extra 360 yen directly to the conductor on board the train. 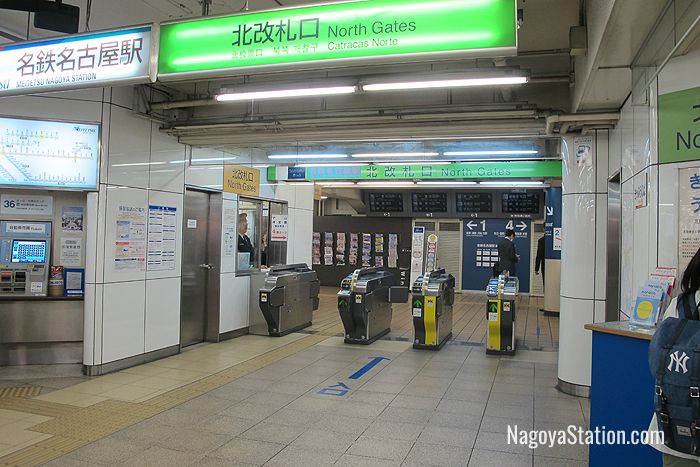 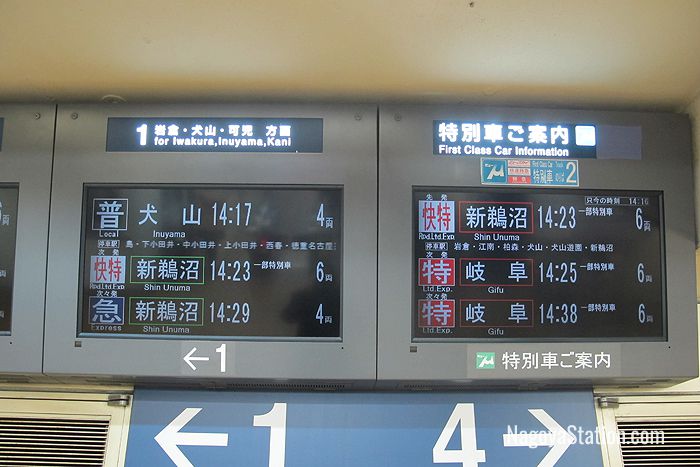 Below are the most popular destinations on the Meitetsu network. Example journey times and basic fares are given from Meitetsu Nagoya Station. 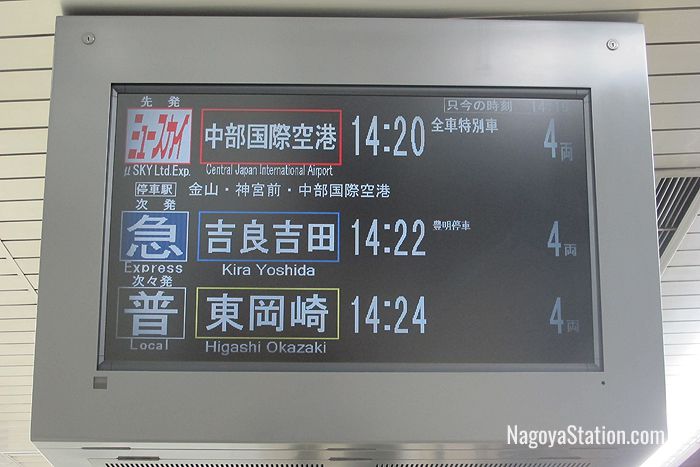 A departure information screen on Platform 4. Departures are color-coded so that you know where to stand on the platform for your train

Meitetsu have a variety of services running directly between Meitetsu Nagoya Station and Chubu Centrair International Airport. The fastest service is the μ Sky Limited Express which takes just 28 minutes to reach the airport for a fare of 1,230 yen. All seats on the μ Sky Limited Express are first class, so this fare includes the first class reserved seating fee of 360 yen. Other Limited Express trains take 35 minutes to get to Chubu Airport, and have a choice between first class and ordinary seating. If you choose ordinary seating you will only have to pay the basic fare of 870 yen. 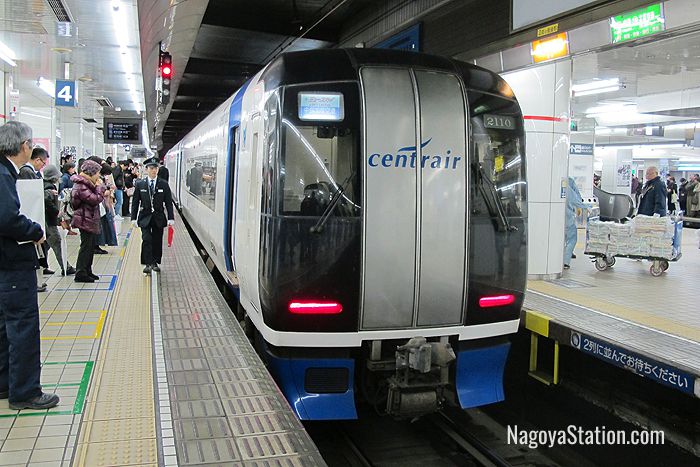 Gifu’s attractions include the Mount Kinka Ropeway, Gifu Castle, the Gifu Museum of History, and the Eizo & Toichi Kato Memorial Art Museum in Gifu Park. Gifu Castle was first built in 1204 but the current building is a reconstruction dating from the 1950s. Inside there is a museum of Gifu’s history and the observation deck at the top of the castle gives superb views over the city. A variety of services run between Meitetsu Nagoya and Meitetsu Gifu stations. A Limited Express takes 27 minutes for a basic fare of 550 yen. 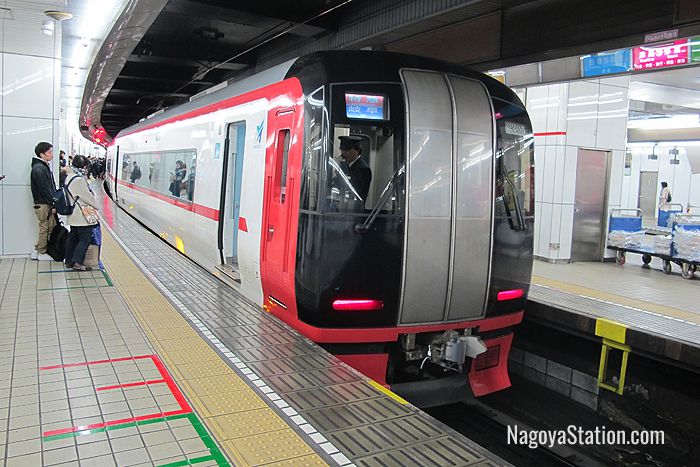 A Limited Express for Gifu

Inuyama Castle is the oldest castle in Japan and dates back to 1440. In the town beneath the castle there are many preserved wooden buildings from the Edo era. Not far from Inuyama is the Meiji Mura open-air architectural theme park. Many Meiji era buildings from around the country have been dismantled and then rebuilt at this location to preserve them for posterity. The most famous example is the entrance to Frank Lloyd Wright’s Imperial Hotel, but there is also a prison, a hospital building, several residences, and even a cathedral. Inuyama is also known for ukai comorant fishing which takes place every year from June to October. A variety of services run between Meitetsu Nagoya and Inuyama stations. A Limited Express takes 25 minutes for a basic fare of 550 yen.

Toyohashi’s attractions include Yoshida Castle which dates from 1505, Toyohashi City Museum of Art and History 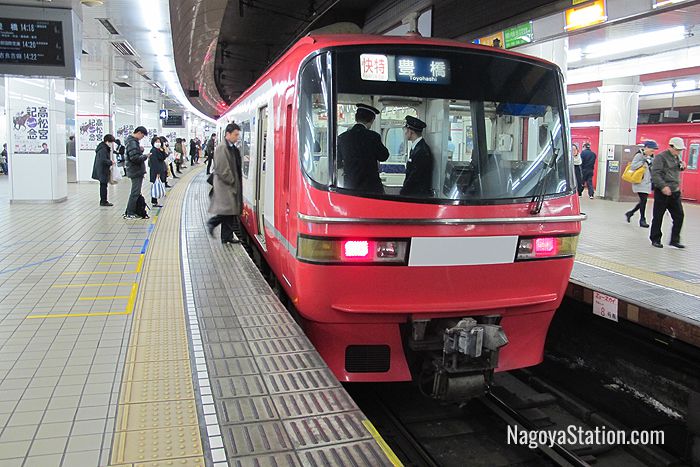 A Rapid Limited for Toyoshashi

The Chita Hanto Peninsula to the south of Nagoya is blessed with a beautiful coastline, fine beaches, and several locations of cultural interest.

Himakajima and Shinojima are popular island destinations which are known for fishing and gourmet seafood. They can be reached by ferry from Kowa Station. A Limited Express from Meitetsu Nagoya can reach Kowa Station in 49 minutes for a basic fare of 920 yen.

Tokoname is an ancient pottery town with many buildings and museums dedicated to the pottery industry. There are also pottery footpaths where the walls and the path are both decorated with pieces of pottery. A Limited Express from Meitetsu Nagoya can reach Tokoname Station in 30 minutes for a basic fare of 660 yen.

Utsumi is best known for its popular beach and for the Minamichita Onsen hot spring resort. A Limited Express from Meitetsu Nagoya can reach Utsumi Station in 62 minutes for a basic fare of 1,110 yen.

Chubu Centrair International Airport have a transfer map which shows how to get from any part of JR Nagoya Station to Meitetsu Nagoya Station.