Nagoya’s best known attraction is its castle, but it also has a large number of museums, gardens, and historical temples and shrines. In this article we list the essential sights you should see when you visit Nagoya. 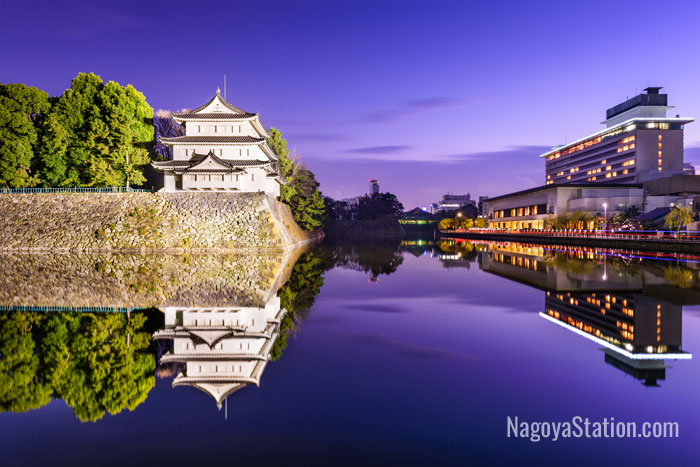 Nagoya Castle is Nagoya’s most popular tourist attraction and is famous for the two golden dolphins that decorate the roof. This castle was first built by the Shogun Tokugawa Ieyasu in 1612. Unfortunately, the original castle was destroyed by bombing during World War 2 and the current building is a 1959 concrete reconstruction.

The castle is 48 meters high and has a top floor observation deck with fine views over the surrounding parkland and city. Inside the castle is a museum with historical artifacts such as artworks, armor, helmets and swords. In recent years the city government has announced plans to demolish the current reconstruction and rebuild it as more historically accurate wooden castle by 2022. 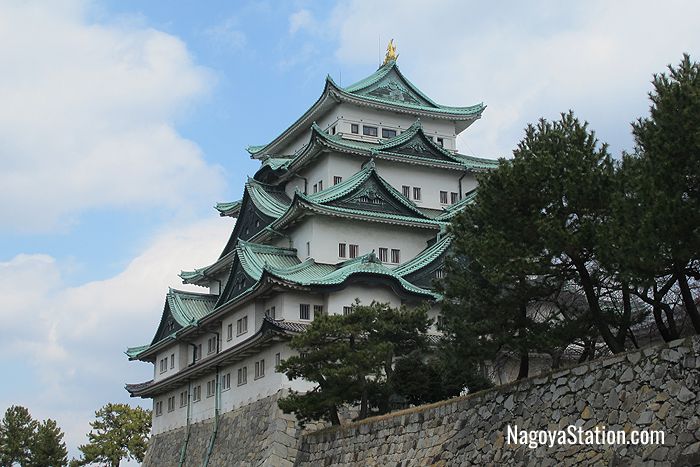 Location: Nagoya Castle is located in a large park close to Nagoya City Hall. The nearest subway stations are Sengen-cho Station on the Tsurumai Line and Shiyakusho Station on the Meijo Line. To go by bus you can take bus 14 from bus stop 9 at Nagoya Station and get off at the Meijo Byoin stop. The Me~guru Sightseeing Bus also stops at this location. Map.

Wondering what to do in Japan? Discover and book Traditional Cultural activities, Walking Tours and other experiences to create unforgettable memories during your stay in Japan! Book online Tours & Activities in Japan

The Tokugawa Art Museum was founded in 1935 to house the priceless art and antique collection of the Owari branch of the Tokugawa family. Among the collection’s 12,000 objects are 10 designated National Treasures, 59 registered Important Cultural Properties, and 46 Important Art Objects. The most famous National Treasure is a 12th century illustrated scroll of the Tale of Genji which is only displayed once a year in November, but reproductions are on display throughout the year.

In the permanent exhibition you can see samurai armor and swords, antique silk kimonos, tea ceremony utensils and ceramics, Noh costumes and masks, calligraphy, paintings, and lacquerware. The museum was built on the site of the Owari Tokugawa family’s former home and there is a beautiful landscape garden called Tokugawa-en beside the museum that can also be visited for an additional fee. 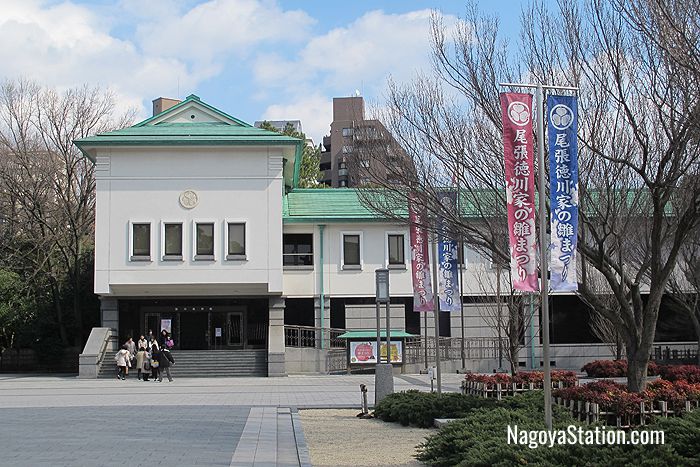 Opening Hours: 10.00 – 17.00 (Last entry 16.30)
Closed: Mondays (unless Monday is a national holiday when it will close the following Tuesday)
Also closed in late December and New Year period.

Location: The Tokugawa Art Museum is a 15 minute walk south of Ozone Station on the Meijo Subway Line. It is also on the Me~guru Sightseeing Bus route. Alternatively take bus 2 from bus stop 2 at Nagoya Station and get off at the Tokugawa-en Shindeki stop. Map.

Tokugawa-en is a traditional Japanese stroll garden centered on a large pond stocked with koi carp, with waterfalls, tea houses and bridges. A garden was first laid out here as part of a vast residence for the Owari Tokugawa family in 1695. However, this garden was destroyed in a bombing raid in World War 2. The new garden was built and opened to the public in 2004.

This garden is known for its seasonal flower displays of plum blossom from February to March, peonies in April, irises in late May and early June, and colorful maple leaves in November. A restaurant overlooks the garden and there is a gift shop too. A visit to this garden can be combined with a visit to the Tokugawa Art Museum which is on the same grounds. 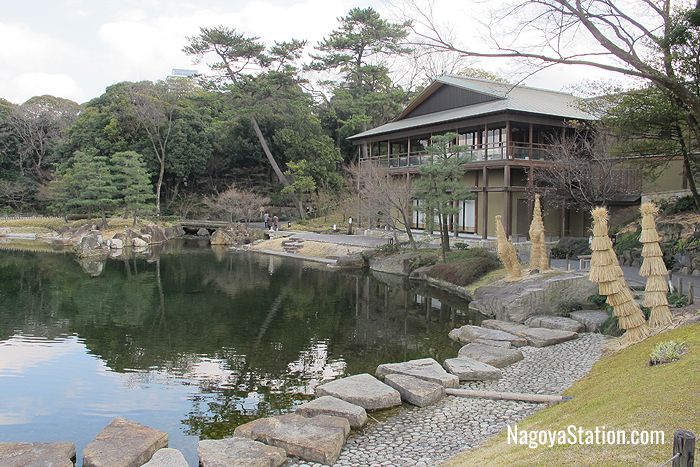 Location: The Tokugawa-en Garden is a 15 minute walk south of Ozone Station on the Meijo Subway Line. It is also on the Me~guru Sightseeing Bus route. Alternatively take bus 2 from bus stop 2 at Nagoya Station and get off at the Tokugawa-en Shindeki stop. Map.

Higashiyama Zoo and Botanical Gardens is a large recreation facility set in extensive parkland which includes an amusement park and observation tower among its attractions. The zoo was established in 1937 and currently has the largest collection of different species in Japan. This includes over 125 different species of mammals such as koalas, elephants, lions, tigers, and bears. The greenhouse in the botanical gardens is the oldest in Japan and is a designated Important Cultural Property.

In the amusement park are a variety of rides which include a roller coaster, Ferris wheel, and merry-go-round. Another attraction is the Higashiyama Sky Tower. The tower is 134 meters high, but because it stands on an 80 meter high hill, it actually reaches a height of 214 meters. At the top of the tower is an observation deck and restaurant with great views over the city. 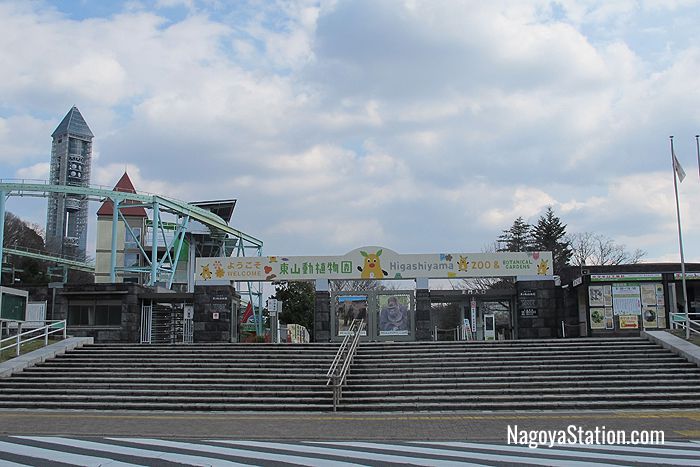 Opening Hours: 9.00 – 16.30
Closed: Mondays (unless Monday is a national holiday when it will close the following Tuesday)
Also closed December 29th – January 1st

Location: The zoo and botanical gardens are a 3 minute walk from Higashiyama Koen Station on the Higashiyama Subway Line. Map.

Koshoji is a Buddhist temple in the woods of Yagoto-yama hill. The temple dates from 1686 and has many wooden buildings, a garden and a tea house. It is best known for its 5-story wooden pagoda which was built in 1808. The pagoda stands 30 meters high and is the tallest in Aichi Prefecture. There is a flea market held on the temple grounds on the 5th and 13th of each month. 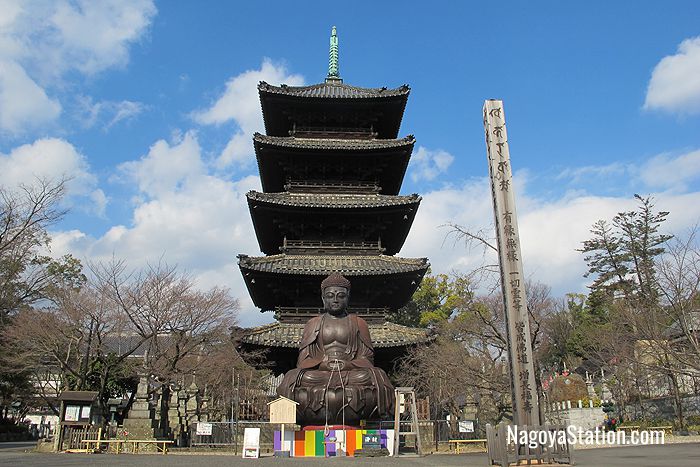 Atsuta Jingu is a large Shinto shrine complex set in woodland in the Atsuta ward of Nagoya that is a very popular center of pilgrimage. The shrine is believed to be 1,900 years old and it is one of the most important Shinto shrines in Japan. According to legend the shrine was founded to house the sword Kusanagi which is one of the Three Sacred Treasures of Japan. It is believed that the sword is still kept safely by the shrine, but it is not on public display. There are however, other ancient swords, garments, masks, mirrors, paintings, and other artifacts on display in the shrine’s Treasure House.

A number of festivals and ceremonies are held here throughout the year, but the main shrine festival is on June 5th. This features a costumed procession with a portable shrine and is held to give thanks for the safe return of the sacred sword Kusanagi after it was stolen in the 6th century. 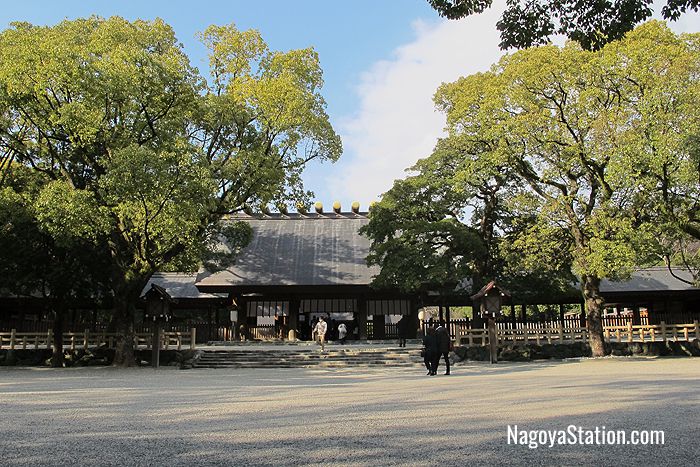 Location: The shrine is a 7 minute walk from Jingu-Nishi Station on the Meijo Subway Line. Alternatively take bus 18 from bus stop 4 at Nagoya Station to the Meitetsu Jingu-mae stop. Map.

Osu Kannon is one of Nagoya’s most popular Buddhist temples and is dedicated to Kannon, the goddess of mercy. The temple has a wooden image of Kannon that is said to have been carved by the monk Kukai, who was the founder of the Shingon sect of Buddhism. Originally built in Gifu Prefecture in 1333, the temple was moved to its current location in 1612. The temple buildings were badly damaged by a fire in the 1920s, but were reconstructed in the 1970s.

A large flea market is held here on the 18th of each month at which you can buy all kinds of antiques, curios, and street stall snacks. The Osu district around the temple has a large network of covered shopping arcades that sell all kinds of goods, but are especially well-known for cheap electronics. 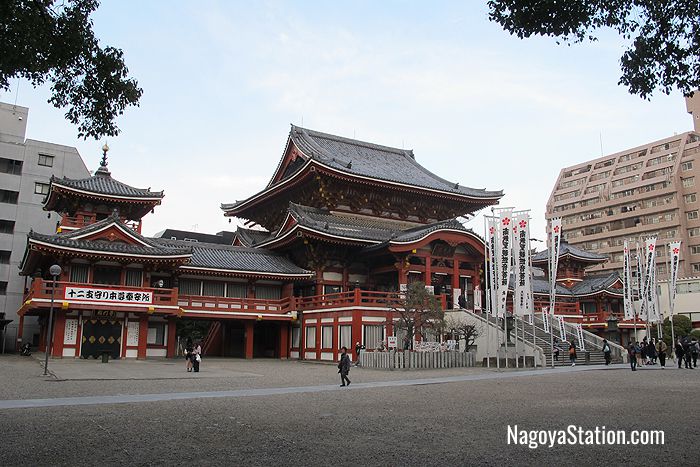 The SCMaglev and Railway Park is one of Japan’s most popular railway museums with displays of rolling stock ranging from historic steam trains to modern shinkansen bullet trains and the new Superconducting Maglev. There are 39 full-sized trains on display, an enormous model railway diorama, train driving simulators, and displays of historical artifacts.

For an extra fee of 500 yen audio guides are available in the following languages: Japanese, English, Chinese, Korean, French, German, Spanish and Portuguese. 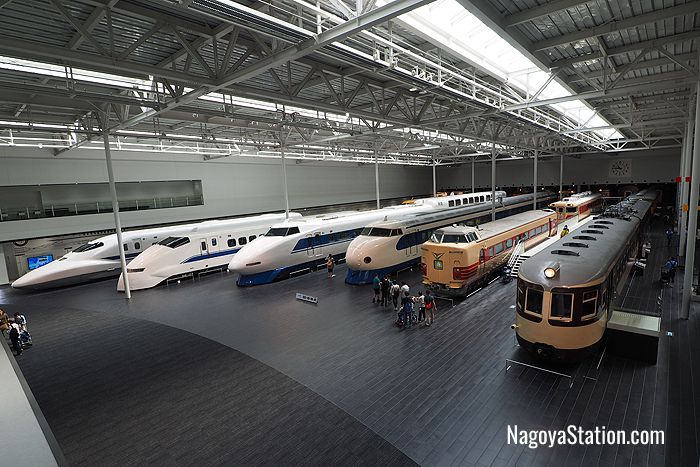 Location: The SCMaglev and Railway Park is located in the Nagoya Port area and is a 2 minute walk from Kinjo-Futo Station on the Aonami Line. From Nagoya Station this is a 24 minute journey and the train fare is 350 yen. The new Legoland Japan theme park is also nearby. Map.

Toyota Commemorative Museum of Industry and Technology is located in the original red brick textile factory where Sakichi Toyoda, who invented the automatic weaving machine, established a weaving factory in 1911. From this beginning Toyota Industries and Toyota Motor Company were born.

The museum covers the history of these companies with displays of automatic looms, automobiles, and the very latest technology including robots. There is also an educational play area for children called Technoland. Guided tours are included in the admission price. 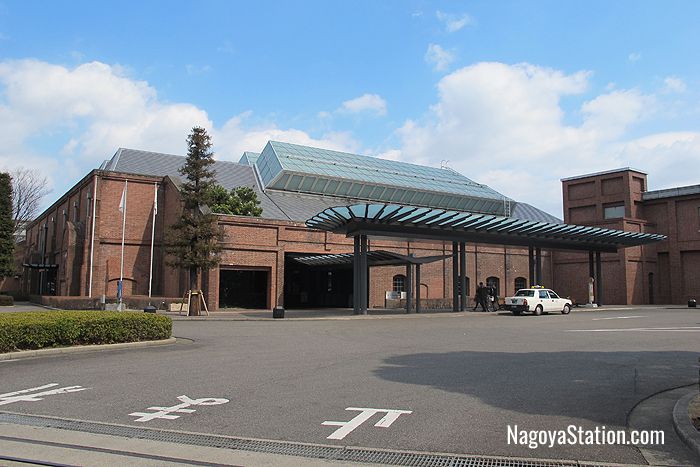 Location: This museum is a 10 minute walk from Kamejima Station on the Higashiyama Subway Line. The Me~guru Sightseeing Bus also stops at this location. Alternatively, take bus 11 or 25 from bus stop 11 at Nagoya Station and get off at the Toyota Sangyogijutsukan stop. Map.

Noritake Garden was founded on the grounds of the Noritake tableware company’s former factory. The garden is arranged around several red brick Meiji era buildings which house a café, restaurant, and pottery gift shop, as well as a combined Craft Center and Museum. In the craft center you can take a factory tour, watch the process by which Noritake pottery is created, and take part in pottery making and painting workshops. The museum displays old Noritake ceramics from the early 1900s. 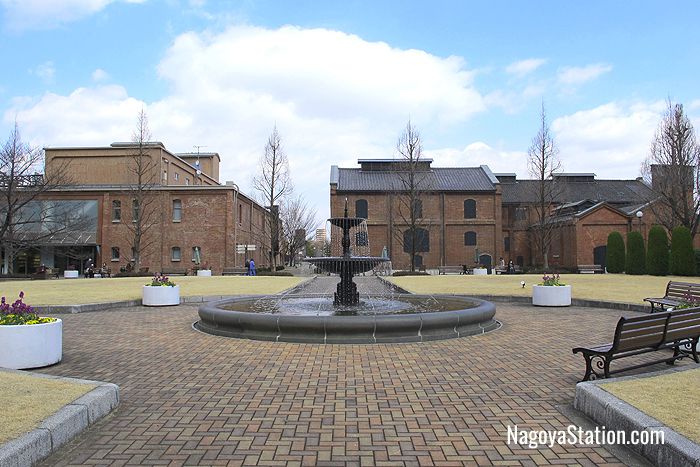 Location: The Noritake Garden and Ceramics Museum is a 5 minute walk from Kamejima Station on the Higashiyama Subway Line. The Me~guru Sightseeing Bus also stops at this location. Alternatively, take bus 13 from bus stop 10 at Nagoya Station and get off at the Noritake-no-Mori stop. Map.