The Tokaido Main Line is a railway line operated by JR East, JR Central, and JR West that connects Tokyo and Kobe stations. However, there are no trains that run the complete length of this line. JR Central operates the section of the line between Atami Station in Shizuoka Prefecture and Maibara Station in Shiga Prefecture. 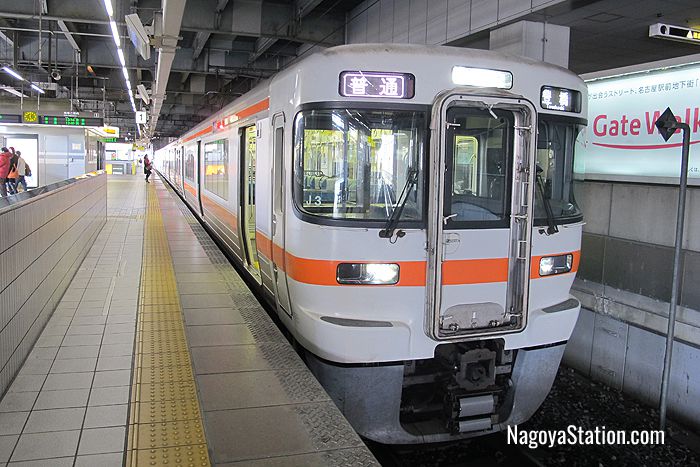 A local train bound for Toyohashi at Platform 1, Nagoya Station

Key Destinations between Nagoya and Toyohashi

At Nagoya Station trains for Okazaki and Toyohashi depart from platforms 1, 2, 3, and 4 and stop at the following stations.

There are also some through trains bound for Taketoyo that are diverted onto the Taketoyo branch line at Obu Station. Below are the key destinations and transfer points between Nagoya and Toyohashi with example train fares and train times given from Nagoya Station. 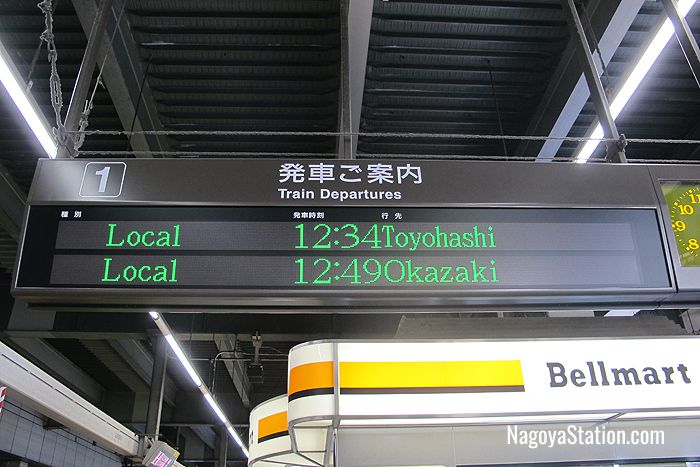 Exit here for the Nagoya/Boston Museum of Fine Arts. Transfer here to the JR Chuo Main Line, to Meitetsu Railway services, and to Nagoya Municipal Subway’s Meijo and Meiko lines. Kanayama Station is an important transportation hub in Nagoya and Meitetsu Railway express train services to and from Chubu Centrair Airport stop here.

Exit here for Atsuta Shrine which is said to be 1,900 years old and is one of Nagoya’s top attractions.

Transfer here to the Taketoyo Line for services bound for Higashiura, Handa, and Taketoyo. Some through train services from Nagoya run directly to Taketoyo via Obu Station. 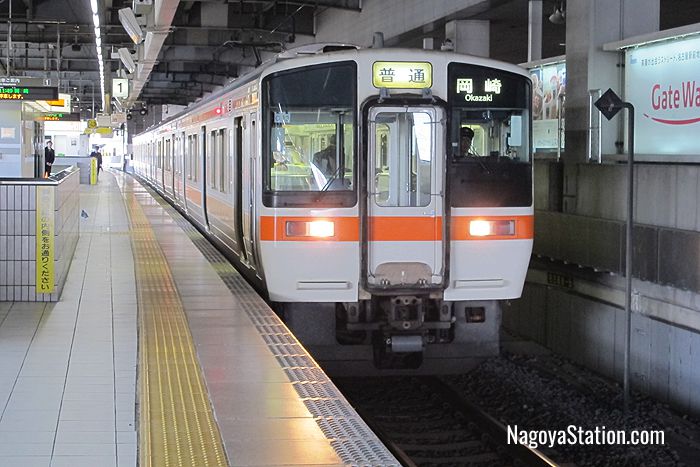 A local train for Okazaki at Platform 1, Nagoya Station

Okazaki’s attractions include Okazaki Castle which dates from 1455, and Takisanji Temple which dates from the 7th century and holds a fire festival every February. Okazaki is also famous for a variety of red miso paste called “hatcho miso”, and the Maruya Hatcho Miso factory which dates from 1337 gives free tours in which you can learn how miso is made and try some for yourself. Transfer at Okazaki Station to the Aichi Loop Line.

There are several onsen hot spring resorts within the city of Gamagori. Gamagori is also home to Kongoji Temple which is famous for its giant statue of the monk Kobo Daishi, and the Lagunasia theme park which has rides, a ferris wheel, and spa. Transfer at Gamagori Station to the Meitetsu Gamagori Line.

This station serves the city of Toyokawa. The main attraction of this town is the shrine and temple of Toyokawa Inari which dates from 1441 and is sacred to both the Buddhist and Shinto traditions. Toyokawa Inari is famous for having thousands of statues of stone foxes, who are considered to be the messengers of Inari, the Shinto god of rice. Toyokawa Inari is a 18 minute taxi ride from Nishi-Kozakai Station.

Toyohashi’s main attractions are Yoshida Castle which dates from 1505, Toyohashi City Museum of Art and History, the Fukugawa-juku Honjin which is a preserved Edo era inn, and the Romanesque-style Toyohashi Public hall which dates from 1931 and is a designated National Important Cultural Property. Transfer at Toyohashi Station to the JR Iida Line, the Meitetsu Nagoya Main Line, and the Tokaido Shinkansen. 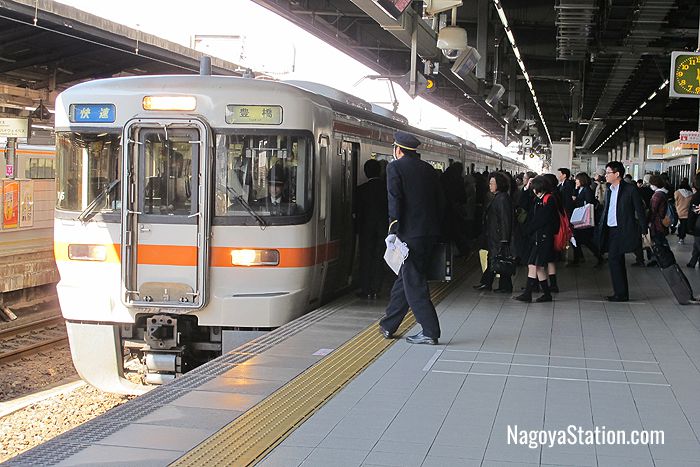 A Rapid train bound for Toyohashi at Platform 2, Nagoya Station

Key Destinations between Nagoya and Ogaki

Trains for Gifu and Ogaki depart from platforms 3, 4, 5, and 6 and stop at the following stations.

Below are the key destinations and transfer points between Nagoya and Ogaki with example train fares and train times given from Nagoya Station. 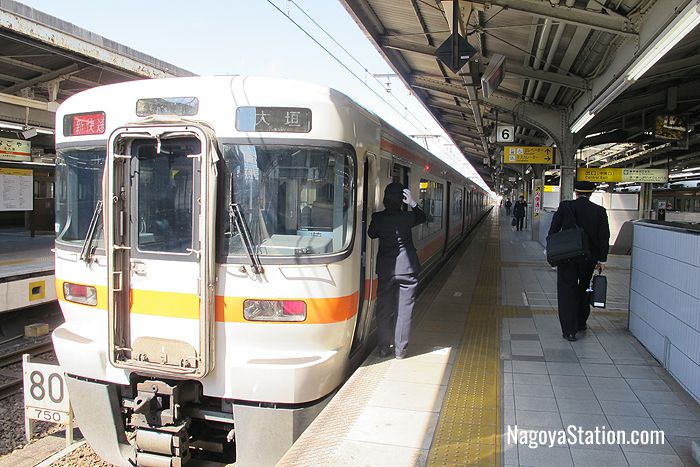 A Special Rapid train for Ogaki at Platform 6, Nagoya Station

Kiyosu’s main attraction is Kiyosu Castle, which is a reconstruction built in 1989 of the original castle which was built between 1394 and 1427 and demolished in the early 17th century. The interior of the castle is a museum of local history and there are fine views from the top.

This station serves the city of Ichinomiya in Aichi Prefecture. This city’s main points of interest are the Masumida Shrine which according to legend dates from 628 BC, and the 138 Tower Park. The park features a 138m high tower with an observation deck which is the tallest arched tower in Asia. Transfer from Owari-Ichinomiya to the adjoining Meitetsu-Ichinomiya Station for the Meitetsu Nagoya Main Line and the Meitetsu Bisai Line. 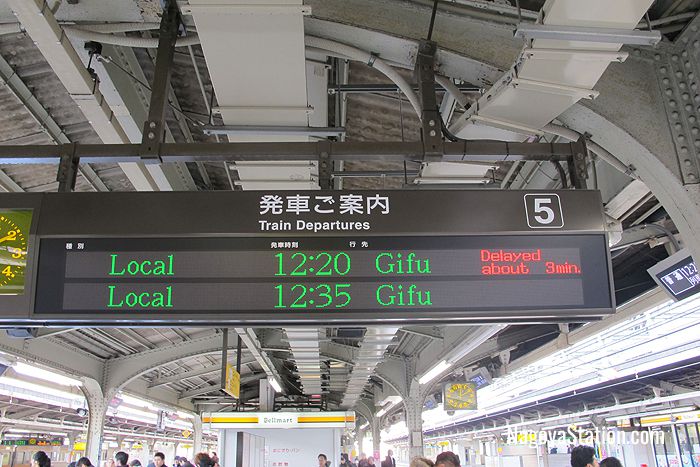 Gifu is the capital city of Gifu Prefecture. The city is best known for its castle which is located on top of Mount Kinka in the center of the city. The mountain also has a restaurant with an observation deck offering dramatic views over the city. Gifu’s other attractions include many museums, the Great Buddha Statue in Shohoji Temple, and summertime cormorant fishing in the Nagara River.

Ogaki City in Gifu Prefecture holds a Basho Festival dedicated to the haiku poet Matsuo Basho every November. Among the city’s attractions are a small Basho museum and the reconstructed Ogaki Castle which was first built in 1500.

Transfer here to the Mino-Akasaka Branch Line, the Tarumi Line, and the Yoro Line. 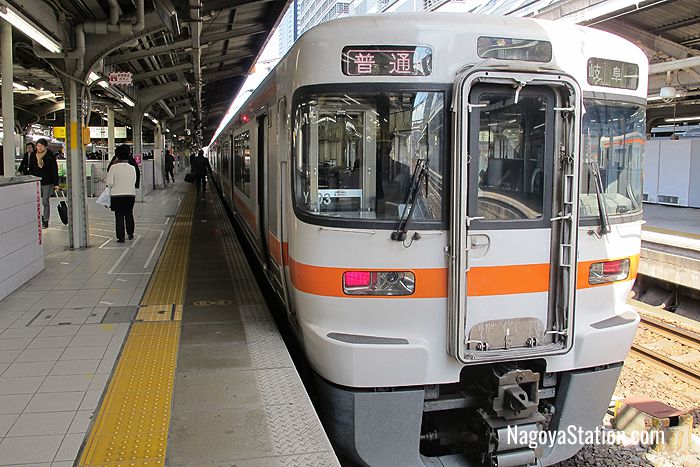 A local train bound for Gifu at Platform 5, Nagoya Station

To look up train times and connections on this line quickly and easily, use English online route finders like Hyperdia and Jorudan.