The Rapid Mie is a rapid transit service run by JR Central between Nagoya Station and Iseshi and Toba stations in Mie Prefecture. Because this is not classed as a limited express service it provides an economical but quick route from Nagoya to key destinations in Mie such as the popular tourist destinations of Ise and Toba. 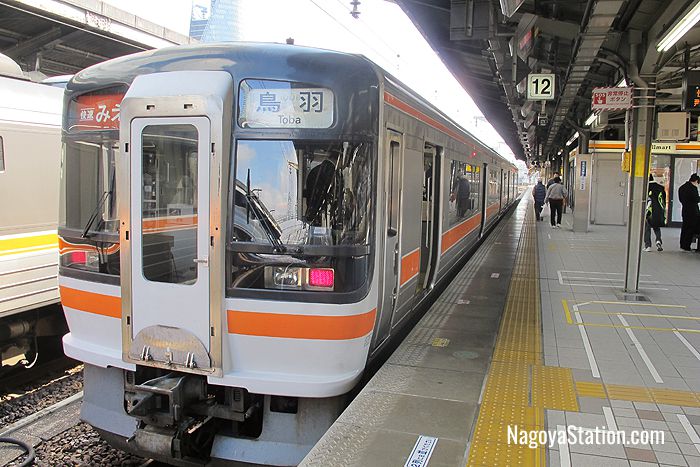 The Rapid Mie is not completely free for Japan Rail Pass holders because for part of its journey it runs along the private Ise Line. If you have a Japan Rail Pass you will have to pay a small surcharge of 510 yen to Ise Railway. At Nagoya Station the Rapid Mie departs from platforms 12 and 13.

The following stations are on the route of the Rapid Mie service. Stations in brackets [] are not served by all trains.

Between Yokkaichi and Tsu the Rapid Mie runs along the private Ise Line. Below are listed the key destinations and transfer points. Example travel times and train fares for unreserved seats are given from Nagoya Station. If you wish to reserve a seat, you will need to pay a reservation fee of between 320 yen and 520 yen according to the travel period.

Kuwana is a small historical city in Mie Prefecture. Kuwana’s top tourist attractions are the Meiji era Rokkaen house and gardens which were designed by the British architect, Josiah Conder, and Nagashima Spa Land which is a popular amusement park with roller coasters, a Ferris Wheel, and a water park. At Kuwana Station you can transfer to the private Sangi Hokusei Line, the Kintetsu Nagoya Line, the private Yoro Line.

Yokkaichi is a major port city in Mie Prefecture. This city is not a major stop for tourists but it does hold a dramatic Dai-Yokkaichi Festival every August, which features parades of giant mechanical dolls, dancing and taiko drumming. From the JR Yokkaichi Station you can transfer by bus to the Kintetsu Yokkaichi Station for the Kintetsu Nagoya Line, the Kintetsu Yunoyama Line, and the Yokkaichi Asunarou Railway Utsube Line.

Tsu is the capital city of Mie Prefecture. Tsu’s main attractions are Kitabake Shrine which was established in 1643, Mie Prefectural Museum, Mie Prefectural Art Museum, and Tsu Castle. Tsu Castle was first built in 1558, but the current tower is a 1958 reconstruction. Transfers can be made here to JR Central’s Kisei Line and the Kintetsu Nagoya Line.

Matsusaka City has many preserved traditional buildings dating from the Edo era and castle remains dating from 1588. There are also two museums in the castle grounds: the History and Folklore Museum, and a museum dedicated to the 18th century classical Japanese scholar Motoori Norinaga. Near to the castle grounds are the Castle Guard Residences which were formerly the homes of the samurai who guarded the castle. One of these buildings is open to the public. Matsusaka’s famous products are indigo blue cotton, traditional green tea, and Matsusaka beef which is believed to be especially tender because the cows are given regular massages and fed with beer. Transfers can be made here to JR Central’s Kisei Line and Meisho Line, and to the Kintetsu Yamada Line.

Iseshi Station serves the city of Ise. Transfer here to the JR Sangu Line and the Kintetsu Yamada Line. Ise is best known for the Grand Shrine of Ise which is the chief Shinto shrine in all of Japan. The Grand Shrine actually has two parts in two separate locations: the Outer Shrine or Geku and the Inner Shrine or Naiku. However, both shrines are easily reached by local bus services. Close by the Inner Shrine is the Okage Yokocho area which has many historical Edo era buildings which have been converted into souvenir and craft shops, galleries, and restaurants.

Toba is a popular resort destination on the Mie coastline. Local attractions include the famous Meoto-iwa or “wedded rocks” at Futami Okitama Shrine. These rocks in the sea are bound together with a sacred rope and are believed to represent the union of the two male and female gods who created the world. Mikimoto Pearl Island has a museum dedicated to the pearl fishing industry and you can see a demonstration by local ama, female pearl divers, who hold their breath and free-dive without any air tanks or scuba gear. Colorful cruise boats also run regular tours of the bay. Transfers can be made at Toba Station to the JR Sangu Line, and the Kintetsu Toba and Shima lines. 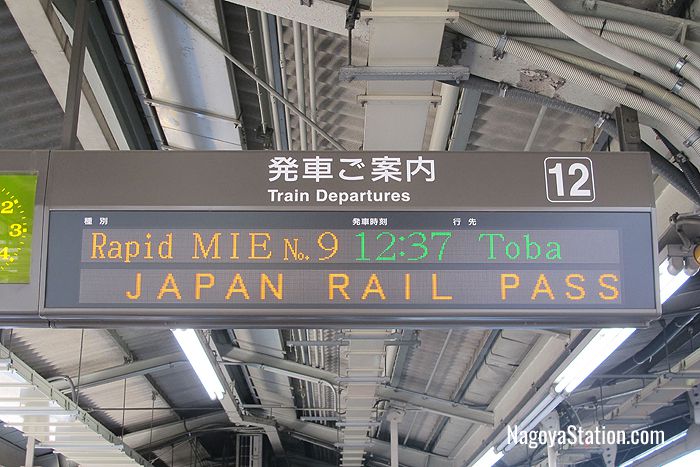 Departure information for the Rapid Mie at Platform 12 Nagoya Station

On weekdays there are 13 Rapid Mie services departing from Nagoya Station. Between 8.37 and 17.37 there is an hourly Rapid Mie service departing at 37 minutes past the hour. After that the Rapid Mie departs at 18.35, 19.33, and 20.33. Services that run between 17.37 and 20.33 terminate at Iseshi Station and do not continue to Toba Station. The weekend and holiday services are almost the same except there is an extra Rapid Mie service departing at 7.43 in the morning which also terminates at Iseshi Station. To look up train times, fares, and connections quickly and easily we recommend English language route finders such as Hyperdia or Jorudan.