The Hida is a limited express service operated by JR Central that runs from Nagoya Station to destinations in Gifu and Toyama prefectures. The train is named after the historical province of Hida in northern Gifu. 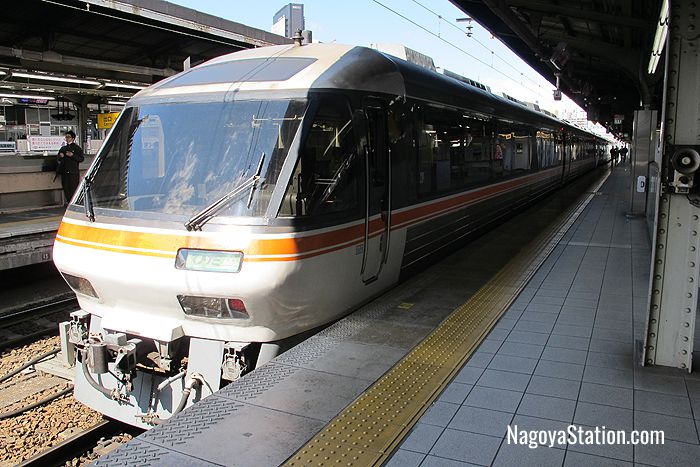 The train is also called the “Wide View Hida” because it has very large windows offering panoramic views of the surrounding countryside. At Nagoya Station this train runs from Platform 11. This limited express service is fully covered by the Japan Rail Pass.

There is also a separate and distinct Hida service that follows a very different route, making just one round-trip service between Osaka Station and Takayama Station each day. This service doesn’t pass through Nagoya Station, but you can read about it on our sister site OsakaStation.com. In this article we will look at Hida services from Nagoya Station.

There are ten Hida services that run from Nagoya each day. Five of these services terminate at the scenic town of Takayama, in Gifu Prefecture, and the other five continue on beyond Takayama as far as Hida-Furukawa or Toyama. The Hida makes limited stops at the stations listed below. Stations in brackets are not served by all trains.

Trains that continue beyond Takayama also stop at the following stations:

Below are the key destinations with example train fares and times given from Nagoya Station.

Gifu is the capital city of Gifu Prefecture. The city’s best known attraction is its castle which is situated on the summit of Mount Kinka in the middle of the city. There is also a restaurant on the mountain with an observation deck offering spectacular city views, and a “Squirrel Village” where visitors can encounter a variety of squirrel species that live on the mountain. The city also has many museums, the Gifu Great Buddha Statue in Shohoji Temple, and summertime cormorant fishing in the Nagara River.

Gero is a well-known onsen hot spring spa town and traditionally counted as one of Japan’s top three hot spring resorts. The other two are Arima Onsen in Hyogo Prefecture, and Kusatsu Onsen in Gunma Prefecture. Gero is surrounded by scenic mountains which can be viewed in all seasons while bathing outdoors in open-air baths.

The popular sightseeing location of Takayama has many attractions including beautifully preserved wooden buildings, temples, and museums. One of Takayama’s essential stops is the Hida-no-Sato Folk Village, an outdoor museum with traditional thatched roof farm houses and demonstrations of local crafts and traditional farming life. There is also a colorful Takayama Festival which takes place twice a year in spring and autumn. In winter, Takayama is a popular base for ski trips in the surrounding mountains.

This station serves the town of Furukawa in the city of Hida. Furukawa has an old town area with a canal full of colorful koi carp, and beautifully preserved white-walled storehouses, candle shops, and sake breweries. Every April 19th and 20th the town holds the Furukawa Festival which features ornate floats and dynamic drum performances.

Toyama is the capital city of Toyama Prefecture. Its best known attractions are Toyama Castle and boat trips on the Matsukawa River. The city is also a good base for hiking trips along the nearby Tateyama Mountain Range. 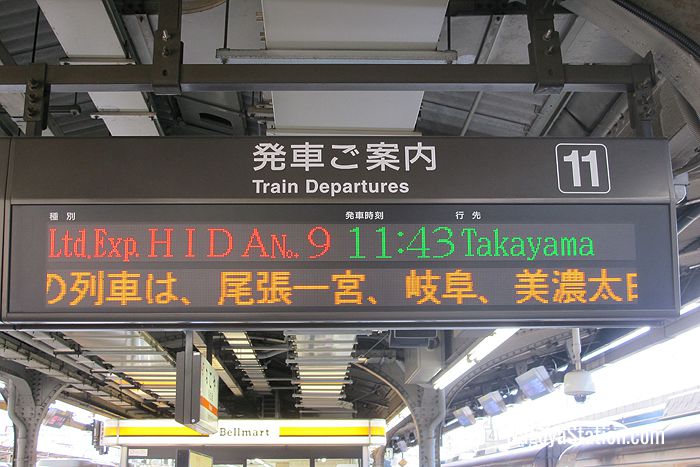 Below are the train times from Nagoya Station. All Hida services depart from Platform 11. To look up connection times quickly and easily use the JR West Timetable and Fare Finder.