The Nanki is a limited express service which runs between Nagoya Station and two destinations in Wakayama Prefecture: Shingu and Kii-Katsuura. This train is notable for passing through several important locations on the scenic Kii peninsula, and is also called the “Wide View Nanki” because its large windows enable passengers to fully enjoy the passing scenery. 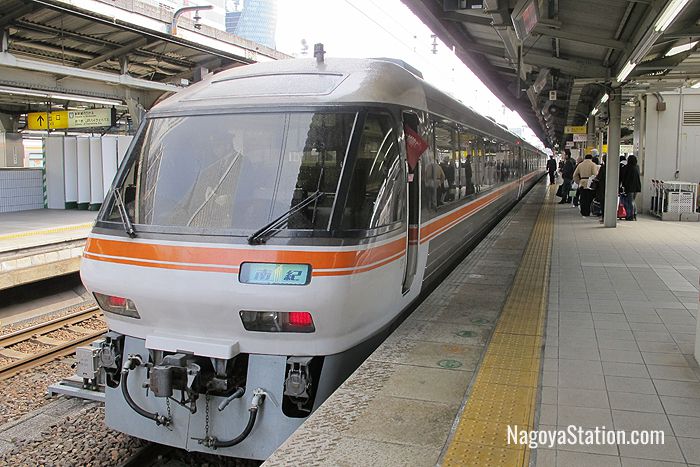 The Nanki is operated by JR Central, but for part of its journey it runs along the private Ise Line. For this reason it is not completely free for Japan Rail Pass holders. If you have a Japan Rail Pass you will have to pay a small surcharge to Ise Railway, but including the passenger ticket of 510 yen, and the limited express fee of 310 yen, the total charge is still only 820 yen. At Nagoya Station this train departs from Platform 12.

The Nanki makes limited stops at the following stations.

Between Yokkaichi and Tsu the Nanki runs along the private Ise Line. Below are listed the key destinations and transfer points. Example travel times and train fares for unreserved seats are given from Nagoya Station. To reserve a seat usually costs around 520 yen extra but this can go up by 200 yen or down by 200 yen according to the travel period. 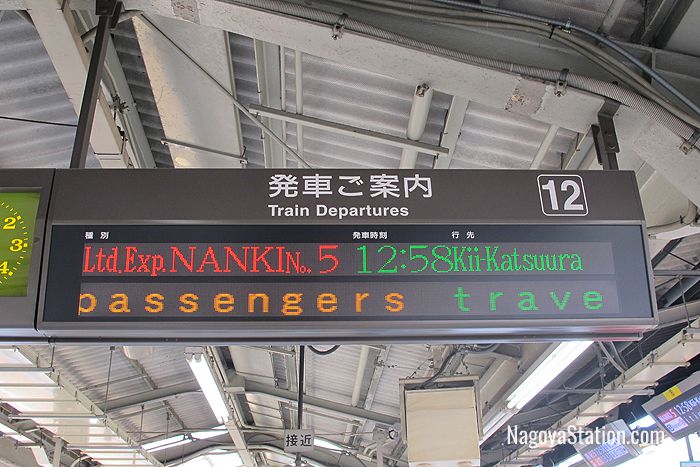 Kuwana attractions include the Meiji era Rokkaen house and gardens which were designed by the British architect, Josiah Conder, and Nagashima Spa Land which is a popular amusement park with roller coasters, a Ferris Wheel, and a water park. Transfers can be made here to the Kintetsu Nagoya Line, the private Yoro Line, and the private Sangi Hokusei Line.

Tsu is the capital city of Mie Prefecture. The city’s attractions include Kitabake Shrine which dates from 1643, Mie Prefectural Museum, Mie Prefectural Art Museum, and Tsu Castle. Tsu Castle was originally built in 1558, but the current tower is a reconstruction built in 1958. Transfers can be made here to JR Central’s Kisei Line and the Kintetsu Nagoya Line.

Matsusaka is a historical city with many preserved traditional buildings dating from the Edo era. The ruins of Matsusaka Castle (built in 1588) are not complete but the walls are still impressive. Within the castle grounds are two museums, the History and Folklore Museum, and a museum dedicated to the 18th century classical Japanese scholar Motoori Norinaga. Close by the castle grounds are the Castle Guard Residences: the preserved homes of the samurai who guarded the castle. One of these buildings is open to the public.

Matsusaka is also famous for indigo blue cotton, traditional green tea and for Matsusaka beef which is believed to be especially tender because the cows are massaged and fed with beer. Transfers can be made here to JR Central’s Kisei Line and Meisho Line, and to the Kintetsu Yamada Line.

Owase is a small port town in the south of Mie Prefecture. The UNESCO World Heritage hiking trail, the Kumano Kodo, passes close to Owase, and the Kumano Kodo Center is also located here. This center has exhibitions detailing the history of the ancient pilgrimage route. Owase Shrine is notable for having a massive pair of sacred camphor trees which are presumed to be around 1,000 years old. They are called the “married couple trees” and people pray here for romantic fortune or for a happy marriage.

Kumanoshi Station serves the city of Kumano. This city is known for its beautiful beaches and rock formations, the scenic Matsumoto-toge Pass hiking trail, and the Hana-no-Iwaya Shrine which is believed to be one of the oldest shrines in Japan.

Kii-Katsuura Station serves the town of Nachikatsuura in Wakayama Prefecture. This is the home of Kumano Nachi Taisha, which is another one of the Three Grand Shrines of Kumano and a UNESCO World Heritage Site. Not far from the shrine is Nachi no Taki, which at 133 meters is the tallest waterfall in Japan.

To look up train times, fares, and connections quickly and easily use online English language route finders like Jorudan or Hyperdia.